General background for and most details of U.S. ground operations are based primarily on a pair of books in the United States Army in Vietnam Combat Operations series, published by the Center of Military History: Stemming the Tide, May 1965 to October 1966 and Taking the Offensive, October 1966 to October 1967. Both are available for download from the CMH website. The story of the B-52 strike during Operation HAWTHORNE is from the project CHECO report entitled “Operation Hawthorne.” This and many other CHECO reports can be found on the Defense Technical Information Center website.

Statistics related to flying hours, sorties flown, maintenance issues, etc., were extracted from all three TEWS histories for June-December 1966. The descriptions of conditions at Nha Trang and Pleiku came from the TEWS at those locations. The quotations regarding ARDF effectiveness in I Corps came from the 360th history.

Descriptions of DRILL PRESS and PHYLLIS ANN operations were gleaned from the History of the 6994th Security Squadron, June-December 1966. This history is not among those thus far (January 2017) obtained through our Freedom of Information Act request. However, we’ve managed to piece most of it together from declassified segments obtained from other sources. Among the charts presented in this history is the one below, showing monthly mission statistics. However, this chart shows only 10 aircraft available from October-December as opposed to the presumably correct figure of 25 noted elsewhere in the history. The numbers of missions flown during that period tracks closely—but not precisely—with the numbers just for the 360th during this period.

Such discrepancies, minor or major, are also found between TEWS/6994th histories for later time periods, which unfortunately makes it next to impossible to state with certainty the number of sorties flown, flying hours logged, and number of fixes made. This is troublesome when trying to accurately determine, particularly in a cumulative sense, the magnitude of the EC-47 effort in any of these categories.

Another chart (click here to view) lists the full serial numbers, arrival dates, and locations of PHYLLIS ANN aircraft through 31 December 1966. Aside from the typo, even this list contains at least one discrepancy: the 360th history shows 43-48947 as arriving on 11 September. That aircraft is not accounted for here. Does that mean there were actually 26 EC-47s in country as of 31 December? Or is one aircraft listed which was not actually in country? Who knows.

Also, the “type” listing are mostly inaccurate. C-47 “D” models were built as B models, equipped with supercharged engines designed for “over the hump” flights from India into China during WWII. Post war, the “blowers” were removed and the aircraft were redesignated as C-47D. In 1967, a “D” model RC-47 became an EC-47P. For the correct model designations, see EC-47 Serial Numbers and Data elsewhere on the site.

This history also contains an interesting chart, reproduced below, showing the numbers of fixes obtained in support of named ground operations. ("Ingram" should read INGHAM, an operation by 1st Australian Task Force.) 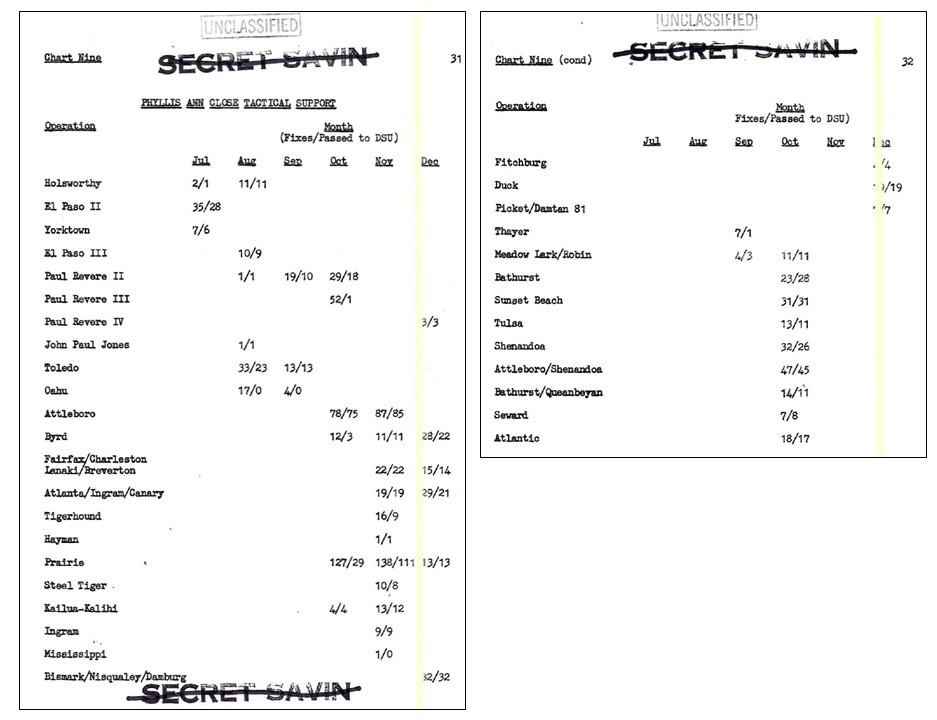