Willard Music -- Now it Can be Told

Well, at least more of it can be told.

Despite being stonewalled (no surprise there) by CIA, recently declassified 6994th histories confirm what we suspected all along: "Willard Music” was indeed a “controlled American source,” initially located at Pakse, Laos, one of the principal towns on the Lao side of the Mekong, about 65 miles east of Ubon.

Communications between with Pakse and orbiting EC-47s were initially undertaken on 31 December, 1970, on a trial basis, the idea being that the Gooney Bird crews would pass fix data to the ground station who would in turn contact a FAC (perhaps the infamous Ravens) to investigate. Limited UHF range and other factors hampered the effort somewhat, but Det 1 reported that “for the most part” fixes could be satisfactorily reported. Results are at present unknown. At any rate, both Dets 1 and 2 continued the drill until 18 May, when Willard Music suddenly announced that “emergency destruction was then in progress and evacuation of the station was imminent.”

A few days later, word was received that the operation, still using callsign Willard Music, would be resumed from Vang Pao’s guerilla headquarters at Long Tieng (Lima 98 or 20A, depending on your source.) This was far outside Vietnam-based operating areas so Det 3 drew the new assignment. The NKP birds began attempting to make contact on 16 June. Three days and 15 missions later, Lima 98 was still nil heard. For openers, the ground operator had been out and about (maybe with good reason) between 1000 and 1600 local. Furthermore, it was discovered on 24 June that the “fingers” on Lima 98’s KY-8 “paddle” were broken! Once these minor issues were resolved, “5-by” contact was established. Unfortunately, the story ends there, perhaps to be continued if/when we get some 94th histories that are still MIA, so stand by. In due course we’ll look to connect a few more dots using other sources. We’ve decided to keep the original post, shown below.

Back in December (Newsletter #003) we asked about a mysterious Laotian KY-8 contact with callsign "Willard Music." As promised, we submitted a FOIA request on the subject and, while we were at it, asked for anything relating to ARDF exploitation by those "controlled American sources."

The answer was pretty much what we expected: "We have nothing openly acknowledged on ARDF, and if we have anything on Willard Music, you ain't gonna see it." Whether to waste time on an appeal, we haven't decided.

At long last, CIA freely admits—or as freely as it ever admits anything—its role in the Laotian war, described in a 500+ page monograph entitled Undercover Armies: CIA and Surrogate Warfare in Laos, 1961-1973. There are redactions aplenty (natch) but it still makes for interesting reading and, coupling known facts with a little imagination, one can make an educated guess as to what Willard Music was or did.

So, guys, if you had occasion to give Willard Music a call—and especially if he/she answered—drop us a line below and tell us about it. The truth is out there . . . . 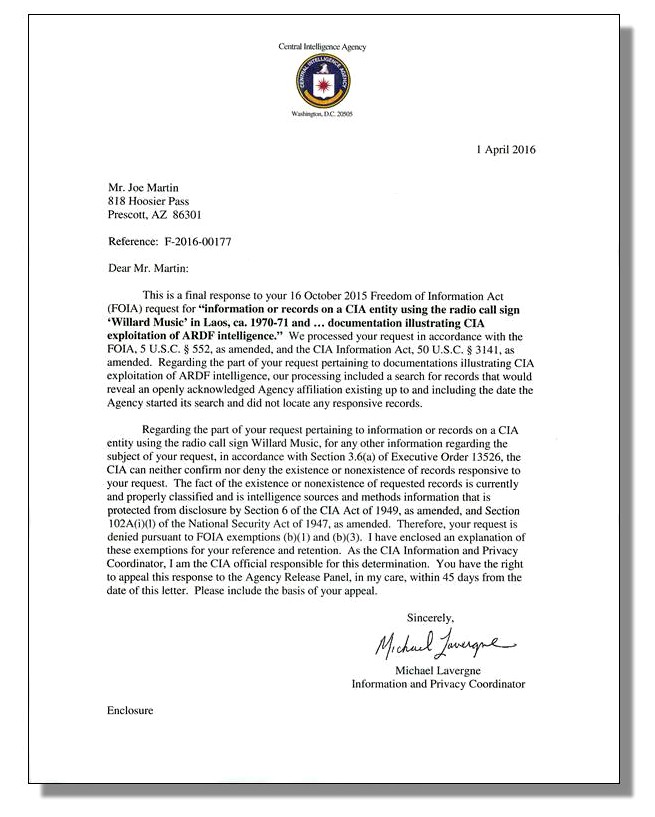