An Electric Goon for Goodfellow

Sometime in the 1994-1995 timeframe, Security Service veteran Senior Master Sergeant (retired) Tom Crowley, then serving as the Chairman of the San Angelo Chamber of Commerce Military Affairs Committee, wrote a letter to the commander of the 17th Training Wing at Goodfellow Air Force Base proposing creation of an EC-47 aircraft static display as a tribute to the enlisted men who trained at Goodfellow before deploying to Southeast Asia with the 6994th Security Squadron, the unit which provided the “back end” ARDF technicians aboard the EC-47.

Such a project was initially deemed unfeasible, but almost ten years later the National Museum of the United States Air Force advised Dr. John Garrett, 17th Training Wing Historian, that a C-47 on display at the Pate Museum of Transportation in Cresson, Texas, was available. The airframe was inspected and found to be acceptable. The Goodfellow base commander then directed that action be taken to acquire the aircraft and have it modified externally to replicate an EC-47Q, complete with simulated AN/ALR-38 system antennas and Southeast Asia camouflage paint scheme.

On May 4, 2004, Precision Aircraft Services of San Angelo responded to the Goodfellow AFB Contracting Office solicitation with a total cost bid of $89,890 to pick up, configure, paint, and reassemble the aircraft at Goodfellow. The aircraft, with tail, wings, and landing gear removed, was loaded on two flatbed trucks and moved to Precision’s hanger at Mathis Field in San Angelo. There were two quite difficult tasks—fashioning the extended nosecone (radome) and manufacturing the molds needed to replicate the ALR-38 antenna array. Otherwise, the work was more tedious than challenging, taking the better part of a year to complete.

On 28 October 2005, Goodfellow AFB and the Heritage Chapter of the Freedom Through Vigilance Association hosted the aircraft dedication ceremony. Among the speakers was the current Director of National Intelligence, Lt Gen (ret) James R Clapper, Jr., who, as a USAF captain in 1970-71 was the commander of Detachment 3 of the 6994th Security Squadron at Nakhon Phanom, Thailand. Former Det 3 crew members Bob Sherwood and Tom Nurre, both of whom went on to hold senior enlisted positons at Goodfellow and elsewhere, participated with Clapper in the dedication plaque unveiling ceremony.

For a virtual walk around of the EC-47 replica as it appears today, go to the ARDF History Exhibit virtual tour elsewhere on the site then click on one of the "plane" views in the upper right corner. Click here for pictures of the replica prior to being "rescued", as well as shots of the restoration process and of the 2005 dedication ceremony.

History of the replica aircraft

The EC-47 replica at Goodfellow has a rather unusual history, details of which were provided to Tom Nurre by the Air Force Historical Research Agency (AFHRA) in the early days of the quest to obtain a C-47 airframe to mock up as an EC-47. (Click here see the AFHRA letter to Tom.) The aircraft was delivered to the USAAF on 15 February 1944 as a C-47A-10-DK, serial number 42-108866. By March, the Gooney Bird was in North Africa. Unfortunately, no details of its wartime service are known, but it presumably served with one of the several Troop Carrier Groups assigned to the Twelfth Air Force.

Post-war, ol' 866 returned to the U.S, where it was disposed of as surplus by the War Assets Administration. A non-AFHRA source cites the new operator as American Air Express/Pioneer Airlines, which could’ve been any one of a number of small airlines using similar names during that period. Through circumstances not explained, 866 was returned to the USAF inventory in June, 1952. It was then transferred to the San Antonio Air Materiel Area (SAAMA), one of several large repair/manufacturing facilities established during the war to maintain and modify military aircraft. SAAMA converted 866 to a staff or VIP transport, spiffing up the old bird by installing an airline-style interior and adding noise reduction insulation. Another modification—most unfortunate from the EC-47 replica standpoint—replaced the C-47 cargo doors with a DC-3 type passenger door and stairs.

January, 1953, found 866, now designated as a C-117C, at Petersen AFB, Colorado Springs, Colorado. In early 1955, the luxury Goon winged its way cross country to Stewart AFB, in upstate New York. For the next twelve years, 866 apparently shuttled around the east coast, being assigned to various USAF outfits, including a Civil Air Patrol unit at MacArthur Airport on central Long Island. In 1969, the aircraft was dropped from the inventory, eventually ending up in the Pate Museum, as described above.

When EC-47Q serial number 43-15204 rolled to a stop at Ubon Royal Thai Air Force Base on 15 May 1974, the U.S. Air Force's eight year ARDF mission came to a close—thus the choice of 204 to be replicated at Goodfellow as a memorial to all EC-47 veterans of the Vietnam conflict. Like its sibling replica, 204 had a long and varied history after coming off the Douglas Santa Monica line in early 1944 as a C-47A-80-DL. Accepted by the USAAF around 18 February, 204 was quickly dispatched overseas, ending up with the 315th Troop Carrier Group. The four squadrons of the 315th participated in every airborne operation from D-Day to VE day, so it’s possible—even likely—that 204 was a combat veteran of WWII, although that cannot be confirmed at this time.

After WWII, 204 bounced around much of southern Europe and the Middle East, spending time in England, Germany, France, Spain, Yugoslavia, Pakistan, and finally with the U.S. Military Assistance Advisory Group, Teheran (Iran). Like 866, it was converted into a VC-47A staff transport along the way, although the original cargo door configuration remained unchanged.

In October, 1967, the well-travelled Gooney was at Air International in Miami, beginning the EC-47 transformation process. If sources are correct, the aircraft did not arrive in Vietnam until September, 1970. The delay may be explained by the fact that 204 was configured as a Q model which, among other things, necessitated fitting R-2000 engines in place of the original R-1830s—a feature that has been faithfully reproduced in the replica by extending the prop shafts 6 inches or so.

While later photos clearly confirm that 204 was ultimately equipped with the AN/ALR-38 ARDF system, the view below, copied from the EC-47 “Dash One”, shows the dipole antennas of an  earlier system, presumably the ALR-35. 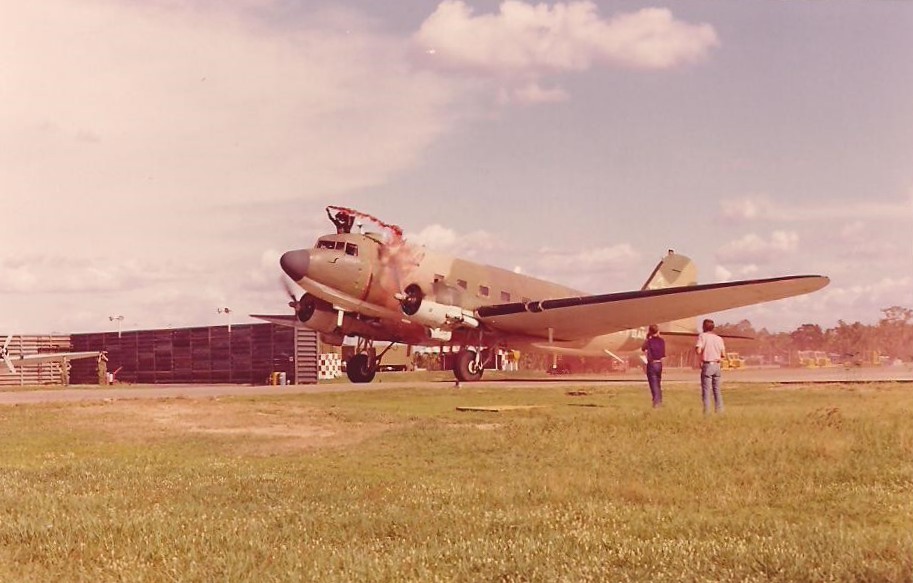 In the shot below, the fini flight graffiti, applied with tape, partially remains, and the serial number clearly confirms the aircraft as 43-15204. (Photo also by Gordy Loiselle.) A hand-carved model in the ARDF History Exhibit memorializes the scene. 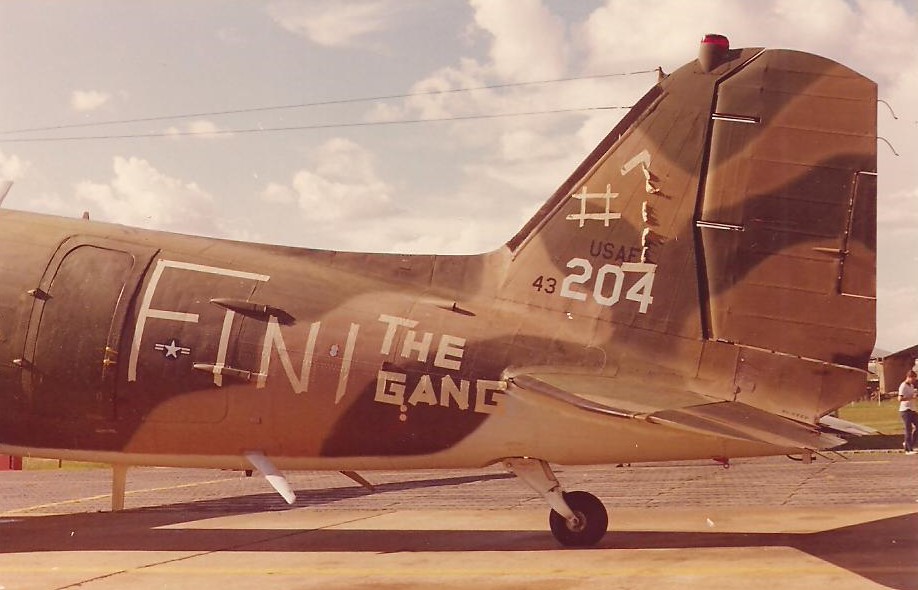 But fame is fleeting. With the final draw-down of U.S. forces from Southeast Asia imminent, the ARDF gear was removed and sometime in June EC-47Q 43-15204 was flown out to Clark Air Base, near Manila, where it was “reclaimed” on 30 September 1974.