The Vietnamese Tet holiday is, as U.S. Ambassador Ellsworth Bunker described it, “a celebration which resembles our Christmas, New Years, and Thanksgiving all rolled into one.” It begins on the first day of the first month of the new year as determined by the ancient Chinese lunar calendar. By the Western, or solar, calendar used in South Vietnam, Tet of 1968—the year of the monkey—would begin at midnight, January 29/30. Even in the midst of war, the Tet holidays had been previously marked by a temporary truce lasting up to 48 hours or so; time which the communists invariably used to replenish their supply caches with minimal interference. In view of the steadily increasing evidence that a major enemy offensive might begin at any moment, COMUSMACV urged a dramatic reduction or even cancellation of the usual stand-down arrangements for South Vietnamese units. Over objections from both Saigon and Washington, his request was at least partly acknowledged. Nonetheless, on the afternoon of the 29th President Nguyen Van Thieu headed for My Tho to celebrate with his wife's family. As he left, Thieu agreed to cancel the Tet truce altogether for the two northernmost provinces of I Corps.

The Attacks of 30 January

Thieu had barely settled in to his delta abode when six mortar rounds impacted on the boundary of the airbase at far-off Nha Trang, triggering a yellow alert. Flare ships were launched but spotted nothing; the alert was cancelled. In fact, several locations in and around the city were under attack, although the extent of the action remained unclear for a time. Within the hour, four NVA battalions swept into the highlands city of Ban Me Thuot, while other communist units hit Tuy Hoa and Qui Nhon on the coast. Pleiku city was likewise targeted, with both the main airbase and the Army field at Camp Holloway coming under attack. Pleiku base took some incoming rounds but only two aircraft were damaged, neither of them EC-47s belonging to the 361st TEWS. Throughout II CTZ, no less than ten cities or allied bases were attacked. In I Corps, patrols had recently encountered several groups of enemy troops on the move around Da Nang. In the wee hours of 30 January, the blow fell there as well. Some 15 allied installations in the area were hit with mortar rounds and 122mm rockets, followed by sapper attacks on the main base. The ARVN I Corps headquarters compound was likewise breached. Marines and South Vietnamese alike scrambled to keep from being overrun, then began to regroup and counterattack the invaders.

Similar scenes played out at the other locales still under attack. Despite warnings and heightened alert status, allied forces were shocked by both the breadth and intensity of these early Tet attacks. Many rear echelon or “administrative” types found themselves suddenly pressed into combat roles they thought had been left behind at basic training. There was much confusion in the early going—was that incoming or Tet fireworks? Information was sketchy; even when communications remained intact it was difficult to piece together a coherent picture. As daylight broke—and every available American strike aircraft took to the skies—the overall situation gradually came into focus. By the evening of 30 January, COMUSMACV felt confident enough to cable CINCPAC and the Chairman of the Joint Chiefs and report that the enemy “has suffered many casualties” with more likely to come "when the dust settles." Allied reaction to the attacks had “been generally good.” Losses, while by no means insignificant, did not appear to be heavy. Although widespread fighting continued, Westmoreland advised that "all my subordinate commanders report the situation well in hand.”

In Saigon, meanwhile, a number of high-ranking American officers, including several attached to MACV J-2 (Intelligence), lounged poolside at a downtown BOQ. Others thoughtfully armed themselves before turning in; a prudent move as events would show. Around 2:45 the next morning (31 January) VC guerillas attacked the presidential palace, smack in the heart of the city. Some 15 minutes later another team of sappers managed to blow a hole in the perimeter wall of the U.S. embassy a short distance away. A few miles northwest was the sprawling Tan Son Nhut airbase complex, housing what amounted to the nerve center of the U.S. and South Vietnamese war effort. At 3:20 am or so, guard posts around the base periphery began taking small arms fire. 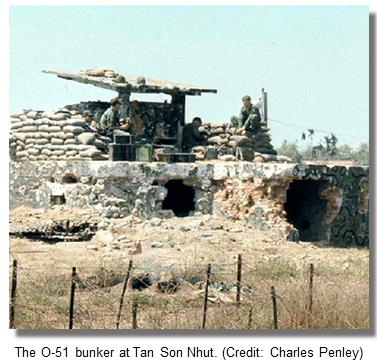 Soon thereafter the bunker near the 051 gate off the west end of the runways received mortar and recoilless rifle fire from a textile mill on the other side of Highway 1. Covered by heavy machine gun fire, commandos raced across the road and blasted an opening in the boundary fence. On cue, hundreds of enemy troops suddenly sprinted from their nearby hiding places. Some charged toward the gap in the wire as others peeled off towards the 051 bunker, manned by the air force's 377th Security Police Squadron. Completely surprised and hopelessly outmanned and outgunned, four of the five policemen were killed as the bunker was overrun, but they managed to sound the alarm and slowed the onslaught for a few precious minutes.

Three enemy battalions, one of them NVA, now swarmed across the highway towards the airfield. The lead elements got about 200 yards down the grassy area between the parallel runways before strafing helicopter gunships slowed their advance. Base quick reaction teams shook off the initial shock and swung into action, while calls for help went out to nearby U.S. Army units held close in response to intelligence warnings a few days earlier. A mechanized cavalry troop of the 25th Infantry Division sped south towards Tan Son Nhut only to be stopped cold at the textile factory, scene of the initial attack. The ensuing firefight went on until early afternoon, while other units struggled to beat off enemy attacks elsewhere on the base and surrounding areas. Allied forces, bolstered by reinforcements gathered from hither and yon, gradually gained the upper hand, but the enemy came perilously close to overrunning Tan Son Nhut. At the embassy, the assigned guerrilla follow-up force never arrived; one of many enemy plans that went awry that night. All the infiltrators were rounded up or killed by 9:00 am on 31 January. There was significant damage in and around the embassy compound, but no VC ever set foot inside the chancery, a fact not emphasized by the Saigon-based news media who rushed to the scene once the shooting stopped. The lull was short-lived. Battles already raging throughout other parts of the city would go on for many days to come.

EC-47 Units and the Tet Attacks

As events began to unfold at Nha Trang, Det. 1 of the 6994th and the 361st TEWS, in a commendable display of local initiative, coordinated the launch of an unscheduled local mission on 31 January. The flight yielded 9 fixes, an unexpected—and greatly appreciated—intelligence bonus for I Field Force, which reacted immediately. This success spurred a second mission later in the day, again with good results. These unscheduled missions continued for the next six days, an off-the-record addition to the regularly fragged ARDF schedule. Although officially grounded for TACAN repair, aircraft 42-23520, the first EC-47 to arrive in theater back in ’66, was pressed into service. In 34.7 hours of flying time, 43 fixes were made on enemy units operating in the vicinity. Local commanders were “extremely pleased with the collection and rapid handling” of the valuable intelligence gathered by this extemporaneous effort.

On 2 February, a Nha Trang crew flying what was evidently a regularly scheduled mission in Area 20—the western portion of Darlac Province including the provincial capital Ban Me Thuot—made 20 fixes, well above the daily average of eight for that area. This sudden increase in activity was immediately brought to the attention of I Field Force, where it received the appropriate attention. The NVA 33d Regiment, having suffered significant losses in its Tet attacks on Ban Me Thuot, appeared to be withdrawing towards its Cambodian base area. I FFV commander Lt. Gen. William B. Rosson, after being briefed on the ARDF evidence, flew to Ban Me Thuot to personally direct operations aimed at cutting off the enemy before he could cross the border. A battalion of the 173d Airborne Brigade was ordered to take up the chase but, as the brigade intelligence file noted, “the CO of the 33d NVA Regiment is noted to be an evasive specialist.” And so he proved to be. The Sky Troopers made little contact; the ever elusive enemy escaped the trap.

The attacks of 30-31 January did not greatly affect Det. 2 and the 362nd TEWS. However, in view of the lack of revetment protection at Phu Bai, the SENTINEL SARA and COMPASS DART aircraft and their crews which had been temporarily based there were ordered to move to Pleiku. As at Nha Trang, there was some local extemporization which, while pointing out the initiative and ingenuity of the personnel involved, also illustrated the somewhat rigid “rules” under which the Army-USAF ARDF fleet operated. 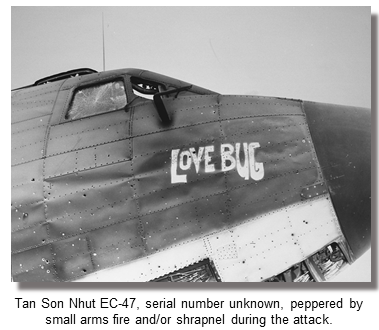 Since most Pleiku mission were programmed into regions outside the immediate area, their crews were not furnished with the technical data with which to identify enemy units whose transmissions they sometimes picked up in route to or from the assigned frag area. When this was pointed out to the proper authorities, some of whom happened to be sitting in the bullseye, crews were quickly provided the materials necessary to identify any priority 1A targets they came across in the Pleiku neighborhood.

Of the three EC-47 bases attacked in the opening round of the Tet offensive, Tan Son Nhut was by far the hardest hit. Fortunately, no 6994th or TEWS personnel were injured there or elsewhere, but nine Electric Goons were damaged—all, according to the 6994th history for the period, the result of “indiscriminate firing by friendly forces during the attack” rather than enemy action. Six of the birds took more than 24 hours to repair; a couple required almost three weeks. Despite having only four serviceable aircraft available, the Tan Son Nhut teams worked 607 targets over the next eight days, 453 of which were fixed. Around 70% of these were within 20 nautical miles of the Saigon area. Eighty-five targets were conclusively linked to known enemy units. Fourteen locations fixed by a 4 January sortie were quickly pounded by artillery or airstrikes. FACs working the area afterward observed numerous bodies nearby. The next day yielded 33 more actionable fixes. Responding infantry units reported killing several enemy troops. And, as always, ARDF intelligence was used to plan longer-term operations.

In the space of 48 hours, the communists had launched surprise attacks on virtually every major urban area in South Vietnam, as well as numerous towns or villages and allied military installations. Several days of intense fighting would be required to secure those cities and towns selected for "liberation." Two major airbases, Tan Son Nhut and Bien Hoa, were subjected to ground attacks that were driven back only after hard fighting. Bases at Da Nang, Pleiku, Nha Trang, and Binh Thuy (in IV CTZ) were hit by rockets and mortars. In all, nearly 100 aircraft were damaged or destroyed. Through good fortune or otherwise, the huge logistics complex and base at Cam Ranh Bay escaped, as did the jet-capable fields at Phu Cat, Phan Rang, and Tuy Hoa.

According to MACV’s later body count, attacks between 29 January and 11 February cost the enemy precisely 31,754 dead, the great majority them “irreplaceable hard-core VC.” In that same period 1,001 U.S. and 2,082 ARVN and Free World troops were killed, and the tote board continued to hum. Thousands of civilians, blasted or burned out of their homes by the fighting, sought refuge where they could find it. The extent of damage and numbers of civilian casualties could not be readily determined. In neighborhoods and occupied buildings in Saigon and Hue, Viet Cong squads remained hunkered down, showing no signs of surrender as U.S. and South Vietnamese troops began the nasty business of rooting them from their strongholds, block by bloody block. The psychological damage—in Vietnam, Washington, and mainstream USA—was just becoming evident.

NEXT: The 1968 Tet Offensive, Part Three