Fixing a Beeper Signal from an EC-47?

Awhile back we received an inquiry asking whether the Electric Goon could “fix” beeper signals (or mayday calls) broadcast on “guard” frequency by a survival radio. First a little background: Both the TEWS and 6994th histories occasionally reported fixing beepers. For example, the 6994th noted that On 17 January 1967, a Compass Dart mission from Tan Son Nhut intercepted a "beeper" signal. Utilizing the aircraft RDF and ARDF associated navigational equipment to determine the approximate location of the signal, they entered the area and established radio contact with the downed crewmember. The mission called in rescue and orbited the area until the rescue had been effected.*

Both the 360th TEWS and the 6994th histories describe fixing a beeper signal on 31 January 1967. The 360th narrative goes into considerable detail.

At 1620 hours on 31 January 1967, while engaged in a routine reconnaissance mission in their assigned area, a Phyllis Ann crew, Dragon 94, received an emergency beeper signal over UHF Guard frequency. Using ARDF procedures in establishing lines of position, the crew fixed the exact location of the beeper signal as 18 miles west of Phan Rang. They immediately notified Phan Rang Air Base tower who dispatched a rescue helicopter (Pedro 44) to the scene. Dragon 94 then established contact with what turned out to be a downed helicopter #868. Proceeding to the downed helicopter, Dragon 94 observed red smoke flares and a red panel marking 868' s position. Orbiting over the downed helicopter which was under hostile enemy fire, Dragon 94 directed Pedro 44 in for rescue pick-up. Sidewinder aircraft (armed Huey helicopters) arrived in the area to provide cover and to suppress hostile fire. At 1650 hours, five persons were observed to have been picked up by Pedro 44. An additional five persons were rescued by 1700 hours. A total of only forty minutes had elapsed from the time Dragon 94 first received the emergency beeper signal to when all personnel in the downed helicopter were recovered. The quick rescue of these personnel were attributed to the outstanding professional skill of the Phyllis Ann crew. These downed personnel might not have been otherwise timely rescued and consequently might have been subjected to capture or hostile enemy action.

How'd they do that?

The back-enders queried agreed (and tech docs confirm) that the AN/ALR-34 or -35 systems could go nowhere near VHF range, much less the 243.0 channel for UHF guard. Since reporting of these SAR efforts predated the introduction of the VHF-capable ALR-38 system, something other than the X console ARDF equipment had to have been used. According to the “Dash 1”, the EC-47 had two separate navigational radios which, if coupled with aircraft location derived from the Doppler, could’ve been used to generate at least a rough fix location. The first of these was the AN/ARN-7 “Radio Compass” of WWII (or earlier) vintage—which could not home in on VHF or higher frequencies. However, the more modern AN/ARA-25 Direction Finding System was designed for just such applications. The figure below illustrates the non-ARDF direction finding antennas on the EC-47. 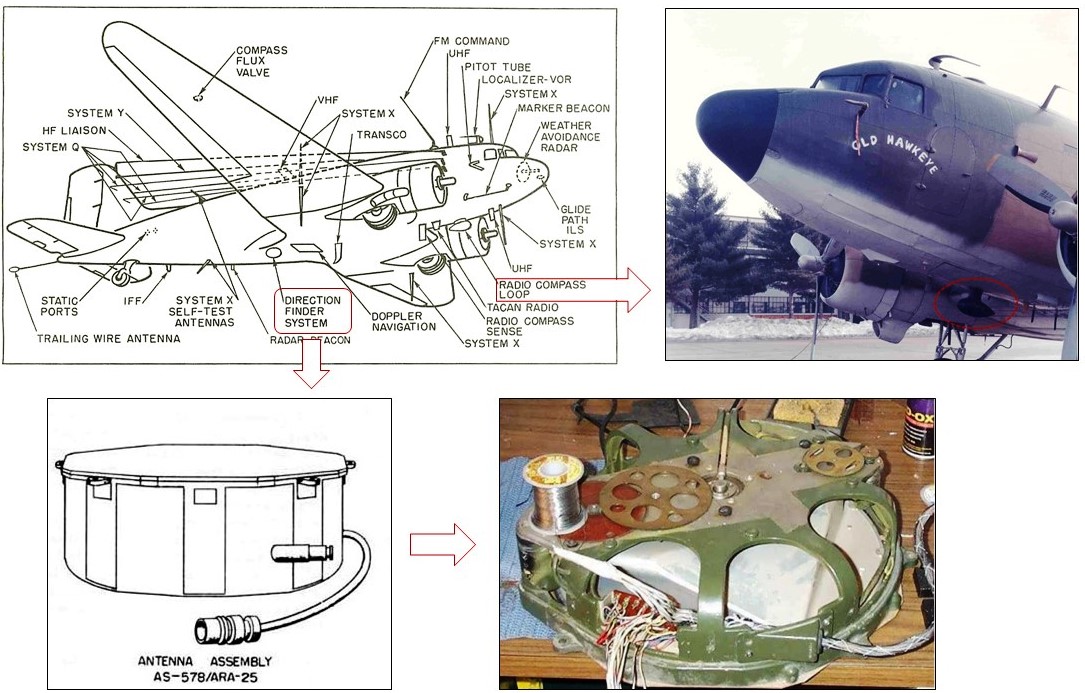 The position of the aircraft was updated continuously by the Doppler. Coupling the azimuth of the beeper signal as indicated by the AN/ARA-25 with the aircraft’s location as shown on a Doppler print-out, the location of the emergency signal could be plotted in the same manner, if perhaps with less accuracy, as an enemy transmitter.

*The TEWS history for the same period makes no mention of this incident, and no U.S. aircraft losses on this date from which crews were recovered are listed in available sources.

Another beeper-fixing incident, this one concerning an army patrol in danger of being overrun, appeared in 7th Air Force News, date as yet undetermined. The article was relayed by Bill Hollenbeck via 6994th.com. Click here to see the clipping.