November 6, 2022, marked the fiftieth anniversary of the last USAF EC-47 mission flown out of Saigon’s Tan Son Nhut airbase. The crew on this milestone sortie was mostly brass from the 360th TEWS and the 6994th Security Squadron. In the left seat was 360th C.O., LTC John Griffith. Co-pilot was 2d Lt James L. Clement, Jr. One of the two navigators aboard was 6994th commander LTC Dave Eddy, perhaps the individual most closely associated with the development of the Air Force's ARDF program. A couple of long-time radio operators worked the back end, one of whom, MSgt Mike Pressler, would log 700-plus missions. The aircraft, fittingly chosen for the occasion, was 43-15112, the very first Phyllis Ann "production" EC-47 to arrive at Tan Son Nhut back in 1966.

Co-pilot Clement had reported to the 360th as a second lieutenant fresh from UPT. He did most of the flying that day but has no idea why Col. Griffith selected him. As Jim remembers it, after tooling around the Mekong Delta for a couple of hours, the colonel simply turned and said, "Jim, we've done enough of this." Home they went, ending more than six years of in-country EC-47 ARDF support to allied forces.

The 360th's stand-down signaled the end of USAF Vietnam-based EC-47 operations, but the Electric Goon and her crews would soldier on for another year and a half from NKP and Ubon. As part of the Nixon administration's "Vietnamization" program 33 aircraft, 43-15112 among them, were transferred to the VNAF's 718th Recon Squadron. The 718th, with backenders from Unit 17/J7 of the RVN Joint General Staff, would fly their EC-47s right up to the fall of Saigon on April 30, 1975. Whether 112 was among the VNAF aircraft that escaped to Thailand that day, we don't know.

Jim Clement, who went on to retire as a bird colonel, is likely the only member of that TSN "fini flight" crew still alive. He attended the 2022 dedication of the Weyandt-Eddy Memorial Plaza at Goodfellow and very graciously provided the images for this article. 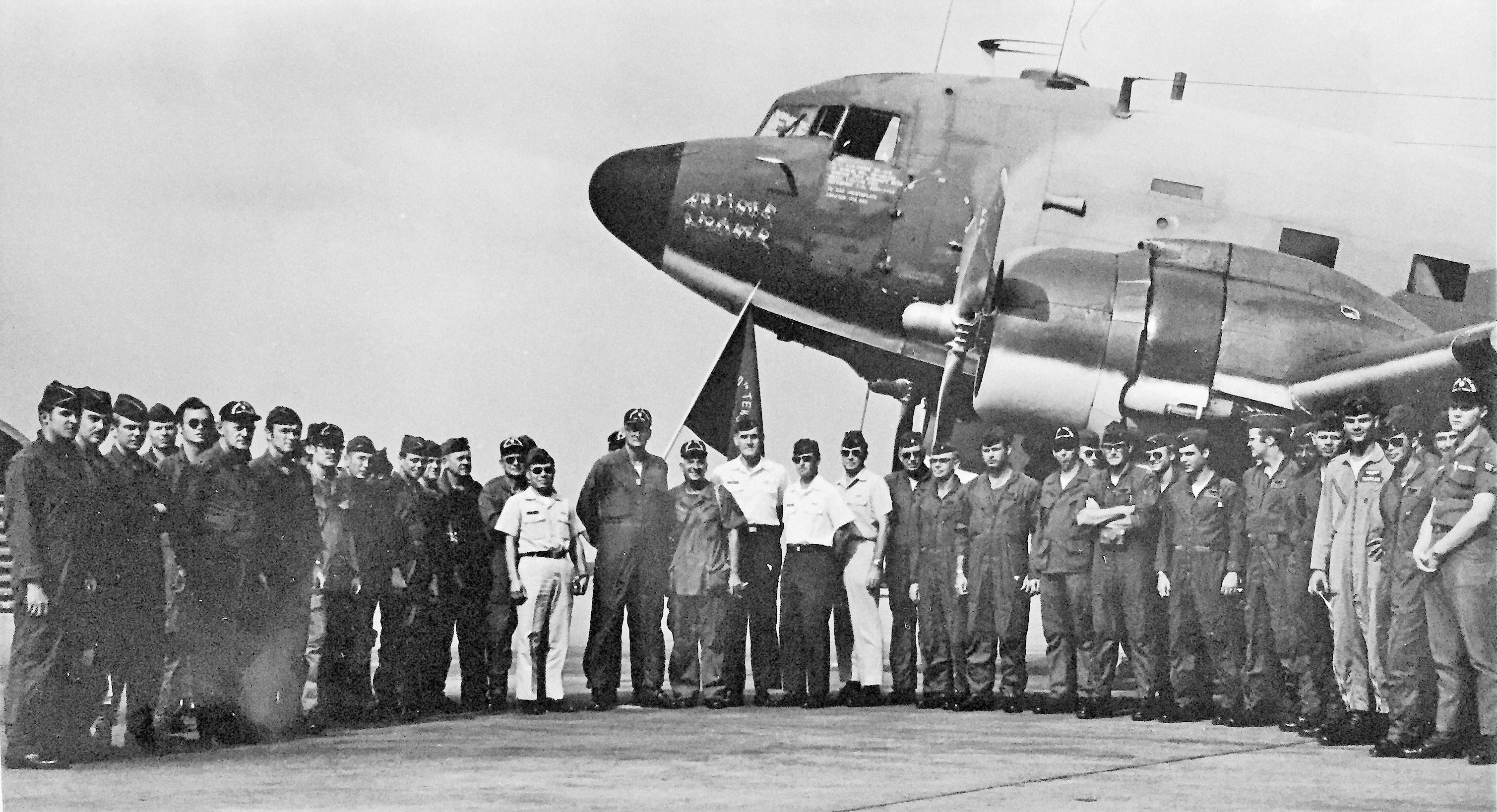 All the 360th brass, as well as some lesser luminaries, gathered for the post-flight celebration. John Griffith, who stood about 6' 6", is clearly distinguishable. Despite actually doing the flying, Jim ended up third from left. The photo is too indistinct to identify faces, but the backend crew seems to be conspicuously absent. For the back of the photo, which lists those who are identified, click here.

(Above) "Antique Airliner" inscription on 112. This is interesting, because in early 1970 the nose art on all 360th aircraft was removed at the direction of "higher headquarters." (R) During pre-flight, Col. Griffith noticed a fuel leak underneath the aircraft. Given the historic and highly visible nature of this sortie, the C.O. was taking no chances. He instructed Jim to call the fire department. Out came the truck, the high octane was hosed away, and the mission went ahead without further ado.

(Below) Even Sux, the 360th's long-serving mascot, got into the act. "The Lady Sux" had the run of the squadron ops building—and just about anywhere else she wanted to go. (R) Fast forward 50 years. Jim sits again in the left seat of a Gooney Bird, this time in the restored C-47 "That's All, Brother," one of the lead ships that hauled U.S. paratroopers to the D-Day drop zones in the early hours of June 6, 1944. Today, the whiskey compass is about the only part of the instrument panel left in the original WWII configuration. But aside from the addition of a weather avoidance radar screen, the EC-47 cockpit hadn't changed all that much twenty-plus years later.

(Below) Jim and family members stand with "That's All, Brother" on a chilly Texas day.