Around 1966 the USAF began camouflaging its combat aircraft and most of the colorful schemes of the 1950s and early 60s disappeared. The new camouflage was commonly referred to as the “Southeast Asia Scheme.” Technical Order 1-1-4, Exterior Finishes, Insignia and Markings Applicable to Aircraft and Missiles, prescribed topside colors as two shades of green mixed with patches of tan, with the undersides a shade of cream gray. For reasons unknown, and contrary to the T.O. requirements, the undersides of EC-47 aircraft, including landing gear, flaps, wheel caps and wheel wells were painted a semi-gloss white rather than the prescribed gray.

T.O. 1-1-4 also contained rough diagrams illustrating camouflage patterns for individual aircraft types. But the diagrams below, extracted from the instruction sheet provided with a set of 1:72 scale model decals produced by an English company in the early 1970s, provide a more accurate rendition of the appearance of an actual aircraft than the generic T.O. 1-1-4 sketch. (The letters refer to placment of small decals relating to the "Andy Capp" nose art.) The T.O. called for colors to be matched to Federal Standard 595, Colors Used in Government Procurement. The colors below are as close to actual paint chips as digital approximation will allow. 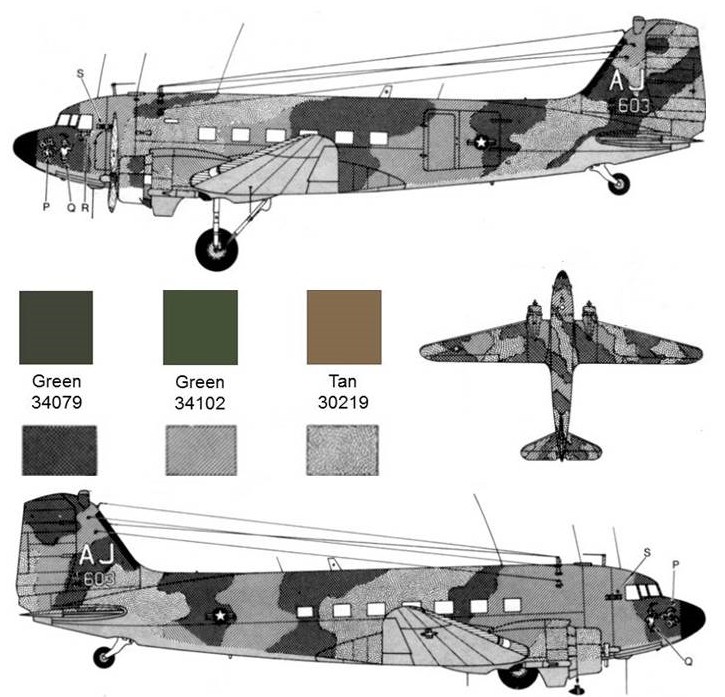 EC-47 radomes were generally painted flat black, although on some aircraft the green and white of the adjacent fuselage area was carried over to the radome. Particularly early on, a few planes had black rectangles painted under the nose, about half the width of the fuselage and extending to approximately the leading edges of the wings. (See, for example, the view below.) Propellers were aluminum with 4” yellow tips (FS-595 color 33538). The Hamilton Standard logo was affixed to each blade, about half way between the hub and the tip. Various information stencils appeared in approximately 1” high black lettering, although the aircraft data under the left side pilot’s window was sometimes in white. (See photos below.) Areas of the fuselage which could be cut by ax-wielding emergency rescue personnel were outlined with dashed yellow stripes and with “Cut here for emergency rescue” stenciled in yellow. A miniaturized version of the national star insignia (15” diameter star) was applied to both sides of the fuselage, the upper left and lower right wings.

Here are two photos of 43-15603, obviously taken some time apart. (The left view is dated 17 July 69.) Notice the difference in radome appearance and the absence of the propeller warning stripe. The ribbon for the USAF Outstanding Unit Award was painted (both sides) just behind the cockpit side window. Andy Capp was a newspaper cartoon character of the day, whose favorite expression was "buzz off".

The Andy Capp nose art was still in place in early 1970, but was painted over soon thereafter, apparently along with the many other examples within the EC-47 fleet. This aircraft, presumably minus the QRC-346 gear, was turned over to the VNAF in 1972. Its ultimate fate is unknown.

The photographs which follow illustrate the Southeast Asia camouflage scheme as it was applied to the EC-47 fleet from about 1968 on. Aircraft from all three TEWS are represented. However, the aircraft were rotated out of country for periodic maintenance or Inspection and Repair as Necessary (IRAN). This sometimes involved repainting as part of corrosion control. When an N or P model aircraft returned to SEA, it could be reassigned to a different TEWS. Because of the unique requirements of the ALR-38 system and R-2000 engine, the EC-47Qs were assigned only to the 362nd TEWS and later, when Seventh Air Force stood down to Thailand, to the 361st. 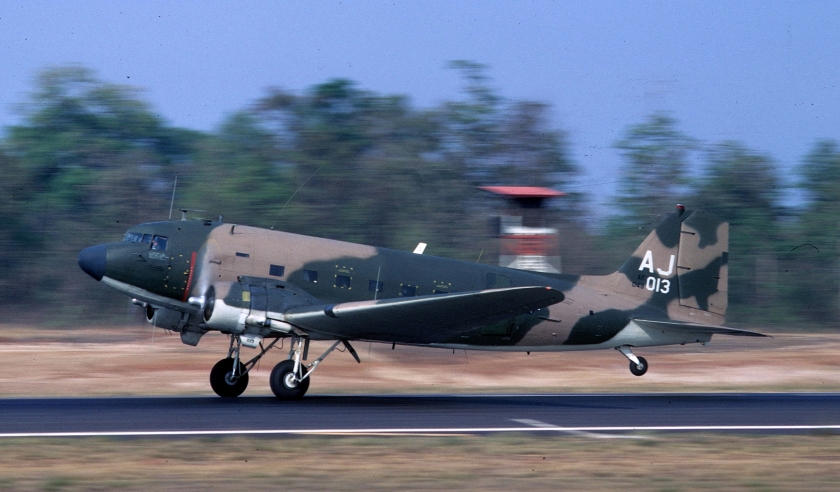 The 360th rotated aircraft from Tan Son Nhut to NKP on a regular basis.
Note the slight pattern mismatch on the fin/rudder.

Note the leaflet chute installed in the rearmost window.
The difference between the two shades of green camouflage is barely discernable. 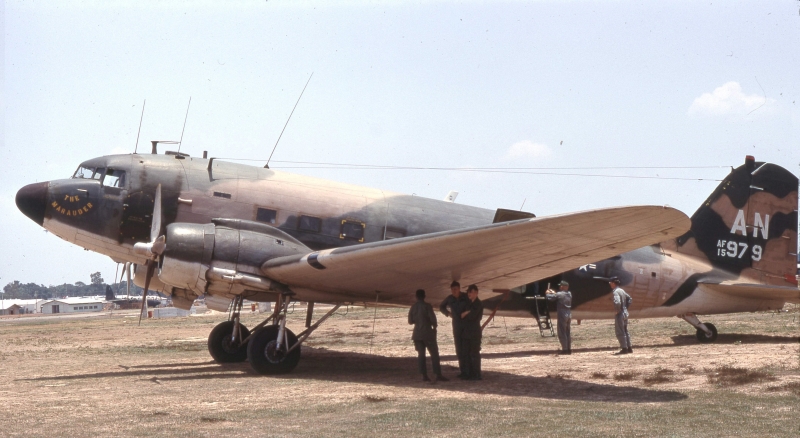 Note the overlap of the AN code and serial number on to the rudder, the touched-up area
on the forward fuselage,and the absence of the propeller warning stripe.

* For explanation of the USAAF's WWII serial number system, see EC-47 Serial Numbers and Data elsewhere on the site.