As 1966 drew to a close, U.S. and “Free World” ground forces in Vietnam were in place and aligned pretty much as they would remain for the duration of heavy American involvement in the war. COMUSMACV could now shift from “stemming the tide” of communist aggression to undertaking extended, large-unit operations designed to “find, fix in place, fight, and destroy (or neutralize) enemy forces and their base areas and supply caches.” These “search and destroy” operations, as intended, inflicted incredible numbers of casualties on the enemy, but would ultimately prove to be ineffective against a foe seemingly determined to carry on the fight no matter the cost.

In January, 1966, total U.S. troop strength stood at about 184,000. By December the number had risen to 361,000; by year’s end it would reach 388,000 as the last division-size units arrived. South Vietnamese forces had likewise increased, but their combat effectiveness was, with some exceptions, not highly regarded by MACV. Consequently, in accordance with Westmoreland’s strategy, the ARVN “took the lead in the heavily populated rural areas and in the cities, devoting most of their attention to battling local Viet Cong units and rooting out Communist political cadre and guerrillas. U.S. combat forces used their superior mobility, engineer support, and firepower to seek out and destroy enemy regulars in the remote forests and mountains while also neutralizing the base areas and infiltration routes that supported them.”

Geographically, MACV’s command structure stuck closely to the four Corps Tactical Zone (CTZ) boundaries established years before. I CTZ, butting against the DMZ to the north and Laos to the west and extending down the coast to include the five northernmost provinces, was the bailiwick of the III MAF, with the 1st and 3d Marine divisions and their supporting units, augmented by a brigade of South Korean Marines.

II Corps included the central highlands provinces of Kontum and Pleiku, coastal Binh Dinh province—a hotbed of communist activity since the French days—and extended southward past Cam Ranh Bay to Phan Thiet. To the west lay Cambodia, ostensibly neutral but in fact a vast sanctuary for the ever-increasing numbers of NVA troops making their way down the Ho Chi Minh Trail. To oversee operations in II CTZ, MACV created First Field Force, Vietnam (I FFV), headquartered at Nha Trang. Nominally resembling a U.S. Army Corps of previous wars, the term Field Force was chosen to avoid confusion with the CTZ designations, which were essentially of South Vietnamese origin. The Field Force concept also allowed considerable flexibility in deployment of forces on an “as needed” basis. Throughout most of 1966, I FFV could call upon the 1st Cavalry Division (Airmobile), the 4th Infantry Division, the first brigade of the 101st Airborne Division, and two ROK infantry divisions. The 5th Special Forces Group, while headquartered at Nha Trang, supported MACV throughout the country.

Included in III CTZ were the provinces around Saigon, and the Capital Military District of the city itself. Obviously of the highest strategic importance, III Corps encompassed the center of the national government and much of the economic and commercial power of the RVN. To direct operations in III CTZ, MACV established Second Field Force, Vietnam (II FFV) at Long Binh. Nominally, II FFV had at its disposal the 1st and 25th Infantry Divisions, the 173d Airborne Brigade, the 199th and 196th Light Infantry Brigades, and the 11th Armored Cavalry Regiment. In Phuc Tuy province, the 1st Australian task force ran operations on a more or less independent basis.

IV CTZ, with innumerable canals and waterways spreading spider web-like across the provinces of the Mekong Delta down to the tip of South Vietnam, continued to be hit by VC guerilla raids but was under no immediate threat from enemy Main Force units. Nonetheless, the U.S. 9th Infantry Division—the last full division to deploy to Vietnam—was, after some debate, selected for riverine duty in the delta.

Reflecting on a grander scale much of the same issues that continued to plague project PHYLLIS ANN, the newly deployed army units were often undermanned, insufficiently trained, and sometimes poorly led. The problem was exacerbated by the Johnson administration’s refusal to call up National Guard or reserve units, which were integral to the implementation of standing war plans. Stateside units were stripped bare, and there were not enough experienced officers and NCOs to meet the greatly expanded training needs, much less fulfill crucial combat roles. The widespread reliance on airmobile operations created a “chronic shortage of aviators,” with some helicopter pilots already on their second tours—at this point still voluntarily.

ARDF and the Direct Support Units 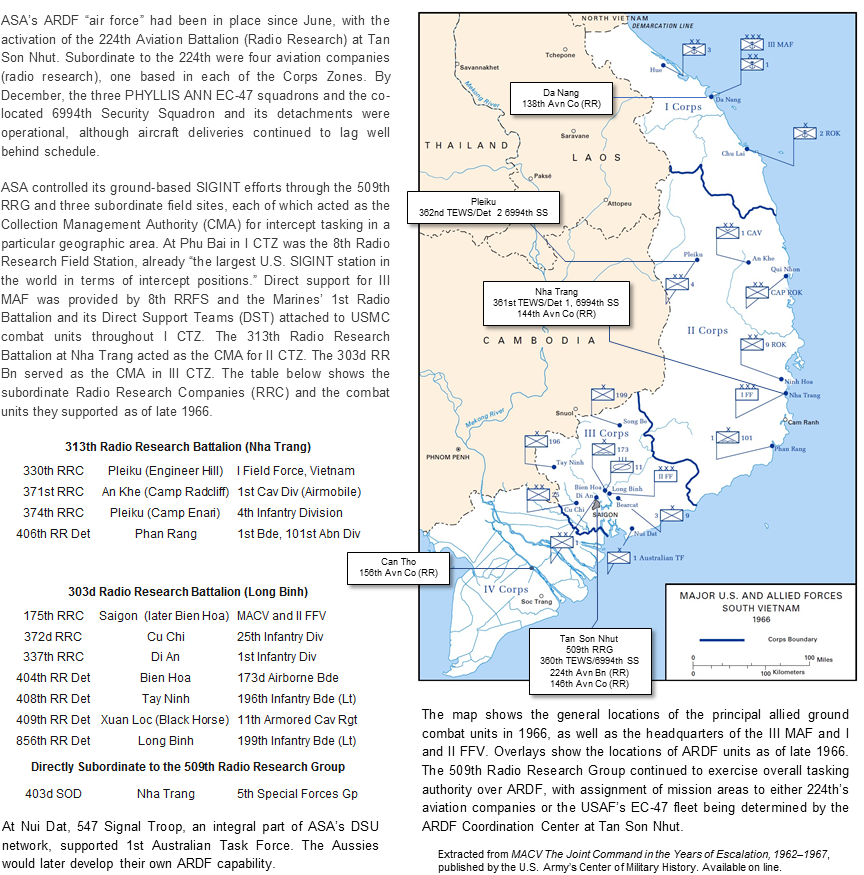 Under ideal conditions, the DSU was the first recipient of ARDF fix data, but this was not its only function. The typical Radio Research Company in Vietnam was in effect a small mobile intercept site, equipped with vehicle mounted intercept positions as well as man-pack voice intercept sets. The venerable PRD-1 still functioned in the SRDF role. Occasionally these sets were mounted in a “Huey” helicopter to create a jury-rigged (and probably quite unofficial!) ARDF platform. Depending on operational needs, the RRC could split into smaller elements, “humping” into the bush with the combat troops, although so far as possible avoiding the possibility of capture or loss of classified data.

With the 362nd Recon Squadron and Det. 2 of the 6994th up and running at Pleiku, the planned organizational structure for project PHYLLIS ANN was virtually complete. Only 25 of the 47 programmed EC-47s were actually in country on 31 December 1966 but, thanks to the professionalism of both front and back end crews and the maintenance types who “kept ‘em flying” and made sure the ARDF equipment functioned as advertised, excellent results were being obtained from the aircraft on hand.